Slangoelie actually offers the easiest access climbing of all the Apostles, as most routes start very near the Pipe Track. Whats more there is a permanent water source on the path! This, coupled with some fantastic routes make it one of the best single pitch trad crags on the Apostles

1. 25m (11): Climb the break, traversing out right near the top to the broad ledge above. Scramble up to gain the base of the rib proper. Start on a slightly raised vegetated ledge about 10 metres right of the crest, below a vague, bushy recess.

2. 40m (10): Climb the ribs immediately right of the vague, bushy recess, continuing fairly directly up to the level of an obvious right-facing corner/recess on the left. Traverse left to a good stance in the corner.

3. 30m (14): Climb the crack in the corner (past an old in situ cam) and continue up, tending slightly rightwards past a small ledge (cairn), then up a few metres to a stance at the base of a right-facing recess.

4. 20m (13): Climb the recess above the stance for 10 metres, breaking out right at the top to a stance in an obvious right-facing corner.

5. 25m (12): Climb the corner/recess for about 10 metres, traverse 4 metres right and continue up the rightward-tending break to finish up the right side of the face, just left of the edge, onto a ledge.

6. 25m (8): Climb the leftward-tending stepped break from the left side of the ledge. Traverse past a vegetated ledge and continue up leftwards to a stance on the crest of the buttress (cairn).

7. 45m (13): Scramble up a few metres, then climb a short recess on the right and the blocky white face above. Move right at a narrow ledge and climb up to the base of a wide recess/crack. Climb this and continue up, past a cairn at a small stance on the right, to stance on the flat block 4 metres higher on the left.

9. 35m (14): Around the corner to the right, there is an obvious orangey recess with a crack in its right wall. Move up to the recess and climb it to a ledge. Continue up to stance on some big blocks. Direct variation 35m (16): Directly above the stance after pitch 8, pull up onto the face roughly in the centre and climb up a few metres before moving right to a break through the small overhang. Pull through this on good holds and continue up the break tending rightwards, then back left to access a narrow ledge below the top bulging section. Traverse to the left edge and pull up leftwards into an undercut scoop. Climb this and mantle onto the ledge. Continue up for 10 metres to stance on top of big blocks.

10. 40m (12): Mantel up to the base of the huge block above then traverse left around the corner. Climb an obvious left-facing crack (awkward), then traverse left and mantel up a smooth short face into a gap and scramble up. Cross the bushy ledge to stance on a block below and slightly right of a wide crack/recess.

11. 35m (10): Climb the crack and short face on the left onto the ledge. Cross this and climb the obvious break up the next rock step. Cross the ledge to stance at a chock stone in a crack at the next step.

The crag has 4 walls with routes on them, with most of the development on the first one: Western Front. We took a World War One theme to it, but knowing where are more lines there waiting attention we hope that people continue the theme. All routes are listed from left to right unless otherwise stated

The crag has a 5m base with a large, comfortable and shaded ledge above. Most of the routes start on this ledge, and we recommend basing your day from here.

Start on the path at the left end of the crag up a clean slabby face beneath a step over roof. Step left at the roof for a small prow, then follow the main crack above to a vague rail about 2m below the next overlap. Traverse 3-4m right to a break in the overlap and take good holds to the top.

These routes start from the ledge

Start from the ledge, left and behind the bushes on the left side of the crag, and the line heads diagonally right until the head wall, where it goes straight up to the tree.

Best Line at the crag: interesting moves with a pumpy disposition. Start in the north-facing, undercut open book on the left side of the wall, and basically follows this line to the top. Head up and right to an undercut nose, then up the vague open book and through easier ground to a rest below a clean face broken by a single, vertical crack. Negotiate this and gun for the tree overhanging the top. Post send rotisserie chicken completes the route.

Just right of a hanging blunt nose is a rounded sheet on the wall- great chicken eating spot. Convince your feet up, then take the fault to the top of the crag. Great Pro.

Excellent line that gets progressively more challenging. Start off a Ladies Tee towards the right corner of the crag: beneath an undercling at the bottom of a small left facing corner. Basically the line takes the big open book all the way to the top, however we strongly recommend stepping left about 5m up over the undercut to take the face above. Then reunite with the open book to the top. The line at the top avoids the feature taken by Spring Offensive. 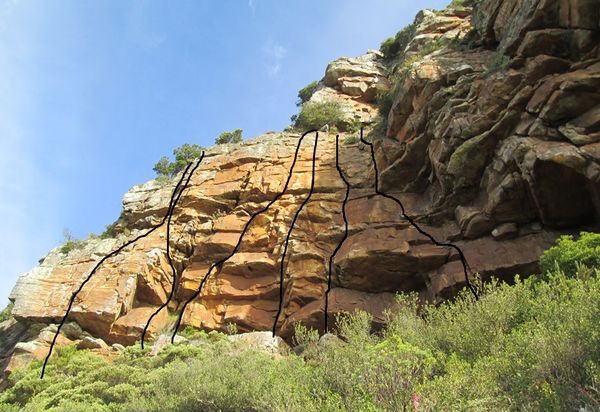 These two lines start in the "Cave" section of the crag on the right, and start on a sandy open book. the main feature of this area is an obvious line through a series of open books which is Pith Of Despair.

This is the longest line at the crag: an enormous left diagonal line sharing the same start as POD and exiting at the tree above An Uncertain Piece. It was opened ground up on-sight.

Take the series of overlapping open books as it tackles the steep wall. At the top the route traverses right to take a prow through to an easy head wall then the top. 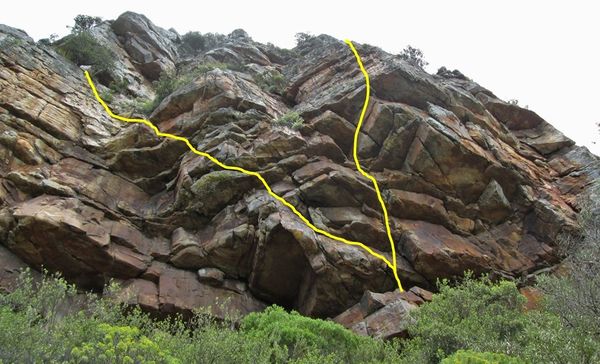 This beautiful wall has been partially cleaned, has a lower off tat but only two lines up it so far. Dr Cunnane and Mr Gans then got distracted...

Left end of the wall has a vague arete with a rectangle face at its base. Across the crag at about 3-4m off the ground is a protruding, jagged ledge with a couple turrets of rock connecting it to terra firma.

1. The Fokker Scourge (16)** Take the arete on the left end of the wall to a right tending crack to the top. last few meters need a clean, sorry. Start up the Rectangular face to the ledge, then step over to the arete.

An improbable looking line for the grade. The route takes a steep launch off the ground to the ledge, then a line series of thin moves to the top, punctuated by a large "Thank God" rest on top of a big flake. Doesn't take gear larger than BD#0.75. Strong contender for the best line on the buttress so far.

Same start as route above, only taking the right fork. It shares a rest at the top of the flake. Exciting finish.

On the right end of the orange wall is a turret, take this to the ledge, step 2-3m right to climb the face just left of the open book crack. Follow the cracks to a horizontal break that bends up to a vertical crack just left of the route. From the next rail blast through to the top. 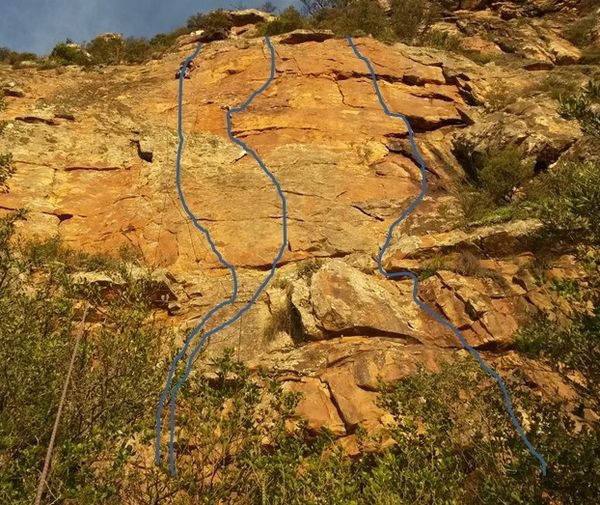 These two lonely routes are quite close to the Frontal Route

The two pitches probably could be linked to one pitch. P1. 10m 19)The route take a a line beneath a huge hanging face with a spectacular hanging arete. Scramble up and start in a left arching crack directly beneath the hanging wall. At the base of the wall/roof step left to a ledge at the base of an open book. P2. 18m (17). Take the open book before traversing across the face using a good rail- to the arete, which is taken to the top.

One of the few routes to face south, this line is at the very right end of the crag and starts in a open book/crack before stepping onto the left face, past a small protrusion to a rail, then onto the top. Best of luck coming down as the opening party got lost trying to walk off.