Waterworld is in the area called Bad Kloof in the town of Montagu. The walk in is +- 10 mins and the crag gets morning shade. There are 14 bolted climbing routes SA grades 18-33.

Waterworld is one of the favorite crags in Montagu. It’s child friendly and the route named Arendsig (Eagles View) is one the best 18’s ever. It’s the first crag on the right when you walk from Die Ou Meul. The sandy base always gets washed away when there is a flood and the river needs to be rerouted about 50 meters upriver in order to keep climbing here. Overhanging, 10 minute flat walk upriver from Die Ou Meeul. 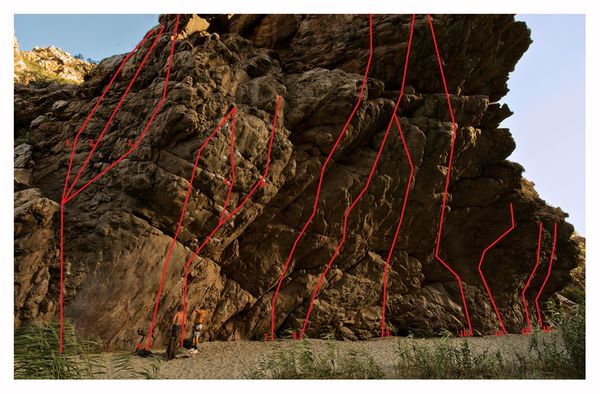 Waterworld Routes from the far LEFT of the crag towards the right (i.e. back towards the car park)

Waterworld Routes from the far LEFT of the crag towards the right (i.e. back towards the car park)